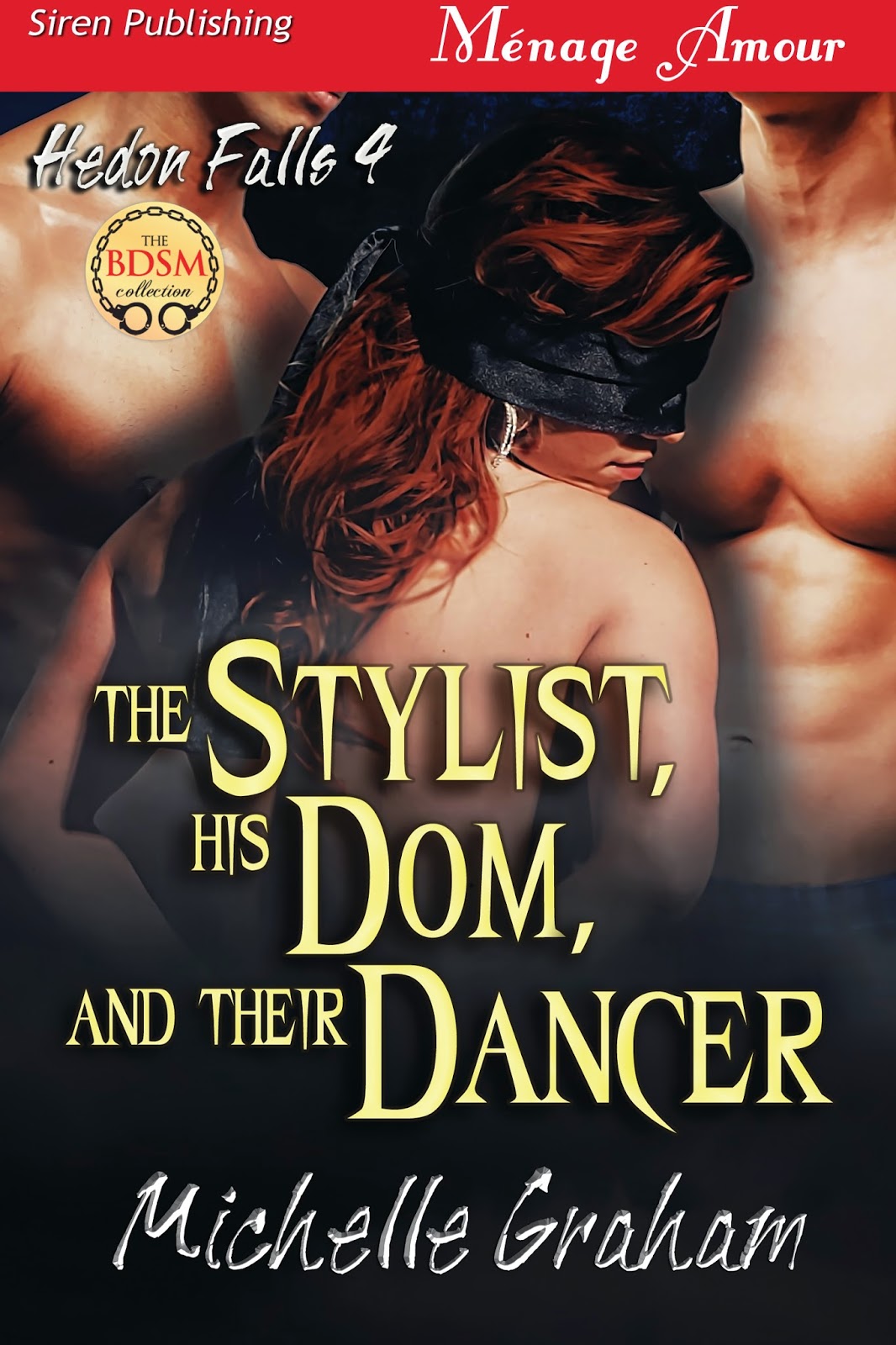 The Stylist, His Dom, and Their Dancer
Hedon Falls 4
By Michelle Graham

Stylist and salon owner Remy Alexander got a second chance at love when he found Seamus O’Connell, but the more time he spends with his daughter’s dance teacher, the more he wonders if there is room for another in his marriage.

As a result of a troubled past, Shay needs order and control in everything, from his work as a chef, to the bedroom he shares with his submissive husband. Remy’s idea to have a ménage relationship upsets the delicate balance Shay has created for himself, but he can’t deny his desire for the sexy dance instructor.

Nicole Collins is a good Catholic girl who pours all her energy into her work as a dance teacher. When she falls for Remy and Shay, they teach her about passion, submission, and love, but incur the wrath of her own father. Can Nicole find a way to hang on to everyone she loves, or will one relationship cost her the other?

Remy stood and went into the bedroom. He bent over Nicole and began kiss her neck as he gently shook her shoulder. It wasn’t long before she stirred, and rolled over to look up at him.

“Hi,” she murmured, rubbing her eyes.

“Hi, yourself,” Remy replied, kissing her. “Shay and I are going to do a scene and we want you to watch so you see what he likes.”

“Perfect! Just go sit in that chair in the corner.”

While Nicole got out of the bed and padded across the room to the chair, Remy pulled a small bench from a storage room beside the closet. Then he laid on it, face down, and waited.

“If you’re going to watch, then you need to stay quiet.” Shay emerged from the bathroom, completely naked, and walked over to where Nicole sat. “Stand up and bend over.”

Remy jerked his head up. He wasn’t sure spanking Nicole right now was the best approach. “Shay, I don’t think—” A look from Shay was all it took for Remy’s mouth to go dry, and he stopped talking.

Nicole had stood and bent over the chair, her hands resting on the arms. Shay moved behind her and used his foot to nudge her feet further apart, so that her ass and pussy were fully exposed.

“I explained that I like to have control in the bedroom,” Shay said to her. “If you don’t follow my directions, you get punished. I’ll take it easy on you right now, but this is what you can expect if you’re going to be with us. And keep quiet. Do you understand?”

“Yes, Sir.” Remy could hear the tremor in her voice, but she was following Shay’s directions perfectly.

Shay brought his hand down on her ass, and she cried out softly. He ran his hand over the spot, rubbing the skin, and caressing her, before he hit her again on the other side. He alternated striking and rubbing the skin a few more times, and then he slipped his hand between her legs and slid two fingers into her pussy. That brought more moans from her.

Remy thought she had handled the spanking rather well for her first time. He knew Shay would have been gentle, but it could be upsetting for some people. He didn’t have time to think about it much more because then Shay was approaching the bench. Without a word, he bent down and began to secure Remy’s hands and ankles to cross bars on the bottom.

Remy lowered his head, and began to inhale and exhale deeply, trying to find that spot in his mind that allowed him to take Shay’s punishments and turn the pain into pleasure. He focused on his breathing, tuning out everything but the sensation of being bound. A moment later, he felt the bite of the flogger striking his back. Shay rained blows across his ass, upper thighs and shoulders, and though Remy grunted a few times, he stayed in that zone.

And then, to Remy’s surprise, Shay undid the restraints. “On your knees.”

“Y-yes, Sir,” Remy stammered. This wasn’t the way their play usually ended, but he did as he was told and knelt on the ground beside the bench.

“Nicole, kneel beside him.”

“Yes, Sir.” A moment later, Nicole was on her knees beside Remy. Shay came to stand in front of them, his swollen member standing straight out in front of their faces, a tiny drop of pre-cum already forming at the tip.
“Remy, teach her how to suck to my cock.”

“Yes, Sir,” he replied with a smile. He grabbed Nicole’s head and kissed her, and then he guided her mouth to Shay’s dick. “Lick around the tip and up and down the shaft,” he instructed her.

She was tentative at first, and Remy leaned forward to help, each of them licking around the head and shaft. Their tongues would sometimes meet, and they’d kiss for a moment before continuing. Then Remy placed a hand on her shoulder to stop her, and began to suck Shay into his mouth, bobbing his head up and down, but stopping after a moment to let Nicole try.

“Open wide and be careful with your teeth,” he told her, watching as she slid her mouth over Shay’s cock, slowly mimicking the bobbing motion Remy had used. What she lacked in experience, she made up for in enthusiasm, and soon was taking most of Shay’s impressive length into her mouth.

Nicole immediately stopped and pulled back from him. “Yes, Sir.”

When Remy saw Shay reach out and brush his fingers along Nicole’s cheek, his heart leapt. Despite his attempts to remain more aloof, Shay was falling hard for the pretty redhead. And Remy wanted this relationship to work more than anything.

Shay slipped off his pants and boxers, and deposited his clothes carefully into the laundry basket, taking Remy’s pant leg from where it hung over the edge and putting it all the way into the hamper. Remy couldn’t take his eyes away as Shay moved around the room, tidying up the few items of clutter, his naked body like a sculpture in motion. When he came to the bed and lifted the sheets to climb in, his eyes dropped to Remy’s cock, now standing fully erect, and he laughed.

“Did you see something you like?” Shay asked as he crawled into bed beside Remy.

“Your gorgeous ass.” Shay pulled Remy close, their lips pressing together. He loved the feel of Shay’s light stubble as their mouths slid against one another, and he moaned when his lover parted his lips and swept his tongue within. Remy could feel Shay’s erection pushing into his thigh and reached down to stroke the velvety shaft which was already dripping a tiny amount of pre-cum.

Shay grabbed Remy’s wrist. “Did I tell you to touch my cock?”

A thrill shot through Remy’s body at the low cadence to his lover’s voice that told him there would be consequences for the unrequested advance, and he released the cock in question. “No, Sir, you didn’t.”

Pulling Remy’s hands away and pinning them above his head, Shay leaned in close and said, “Then you need to be punished.”

“Yes, Sir.” Remy’s voice was breathless and he trembled as Shay released him, and then sat on the side of the bed.

Remy lay across his husband’s knees, his cock painfully hard and pressing into the side of Shay’s leg. When Shay brought his hand down, the slap echoed through the room along with Remy’s loud cry. The sting of the impact faded to a burning warmth, but Remy barely had time to savor the sensation before Shay spanked him again, and again, heightening the pleasure for both of them.

“Foot of the bed,” Shay ordered. After five years together, Remy knew exactly what was required of him. He moved to the end of the bed, bent over with his legs spread wide, and grasped the foot board. Shay knelt on the bed in front of Remy and began running the head of his cock over Remy’s lips. Remy was desperate to taste the sweet rod, but he knew if he tried, he’d earn another spanking, or possibly a taste of the flogger. Though the idea certainly had some appeal, Remy didn’t want to postpone the sex any more than necessary.

Shay teased for a few more moments, but Remy could sense that he was just as anxious to get to the main event, a feeling that was confirmed when he said, “Suck my cock.”

A contented sigh escaped as Remy opened his mouth to accept the hot flesh. The taste of pre-cum was tangy on his tongue, and he licked it all off the tip, then sealed his lips around the head. Remy lowered his head further on the silky skin, slowly taking all of the impressive length into his mouth, relaxing his throat easily. Shay had made sure he had lots of practice. Sucking hard, Remy began to bob his head up and down, spurred on by the other man’s groans, enjoying the knowledge that he could bring such pleasure to the man he loved. Remy would do anything to keep him happy.

As Shay began to leak more pre-cum, Remy sucked harder, knowing an orgasm was close, and longing to taste the hot fluid. But Shay pulled away from him and Remy groaned with frustration.

“Don’t worry, lover,” Shay murmured as he stroked the top of Remy’s head. “I’m not done with you yet.”

Remy turned his head up and they kissed again, before Shay got up off the bed. He opened the night stand and withdrew a bottle of lube and a package of wipes. Remy gasped as Shay dripped the cool lube onto his ass, and then began to massage it into the tight pucker of Remy’s asshole. Closing his eyes, Remy enjoyed the attention he received, relaxing to allow Shay to insert a long finger. The slow, loving strokes left him trembling. Shay added a second finger, and then a third.

Shay slapped Remy’s already sensitive ass. “I’ll fuck you when I’m ready and not before. Understood?”

Crazy with longing, Remy tried to contain himself, as Shay continued to finger his ass. Probably longer than he would have if Remy hadn’t spoken up. Sadistic bastard. But Remy knew that in the end, it would be worth the wait. 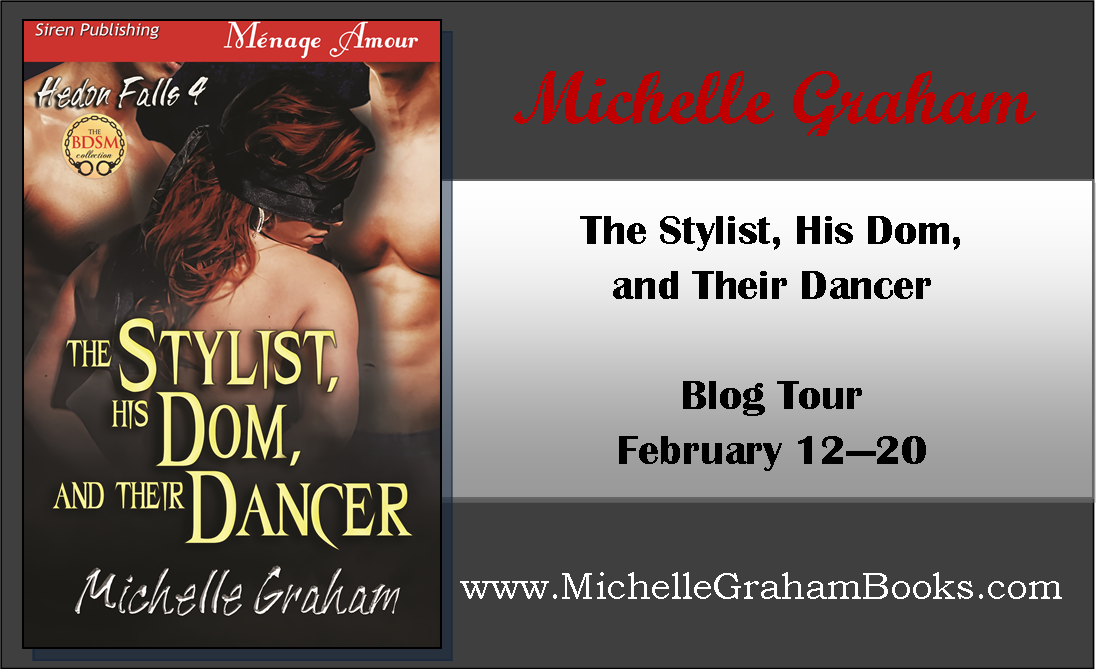 TOUR GIVEAWAY!!
Author Michelle Graham is hosting a tour wide giveaway.
Enter to WIN a Swag Bag (US & Canada only)
or an ebook & $10 Strandbucks (International).

Leave a blog comment below with a valid email to enter.
Must be 18 or older to enter. No purchase necessary.
Last date for entries is midnight February 22.

I'm afraid to start reading this, I don't think I'll be able to put it down.

Okay, I am on my 8th blog stop and I have so bought this book. :)Now all I need is a glass of wine a bubble bath and Channing Tatum.
shaneanreed2@gmail.com

This looks like a good book! I have added it to my to read list. Thanks for the giveaway!

Sounds good, thanks for the chance.
magic5905 at embarqmail dot com

Due to ADULT content (covers, pictures and excerpts from books), this blog is intended to be read by those 18 and over only.